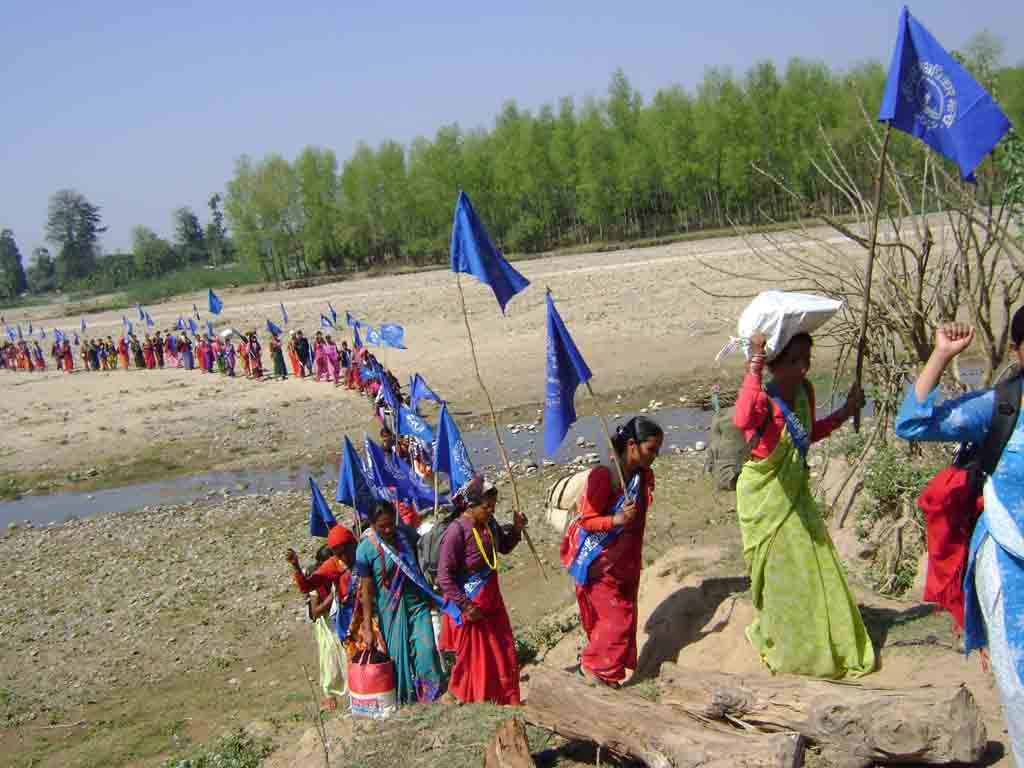 In Nepal, only 19.71% women have land ownership. Deprivation of land rights is synonymous with  poverty and denial of rights. During the program and budget of 2010/11, Government of Nepal  made provision to wave registration fees while transferring entitlement to women. As a result, this will increase women’s ownership in land.

Over time, a number of women led land rights campaigns have brought about important changes at national policy level. In a patriarchal country like Nepal, access to land is fundamental to women’s empowerment. Land rights bring about security, independence and confidence,which will  enable women to become active in all social and political arenas. The National Movement for Timely Constitution Writing and Land Reform saw of more than 1,000 poor women (and more than 100 men) from 50 districts descending upon Kathmandu. This historic event saw working women raising their concerns directly with members of the various political parties. The major outcomes of the national mobilization were as follows;
•   It has been agreed that both the husband and wife would have joint ownership of land provided by the state and a policy announcement has been made which makes it easier for women to be granted joint ownership of their husband’s land.
•   The Government of Nepal directed the implementation of the joint ownership certificate of land which was announced in the budget speech of 2011/12. Each district has already developed a campaign plan in respect of joint ownership. The issue of joint ownership is also included in the ToR of the Landless Problem Solving Commission.
•   The cost to the wife of effecting this transfer of ownership is a tax of 100 NPR. In addition a 40% discount in the land registration fee will be granted to village women living in remote areas.
•   There is a general agreement, from government level downwards, that work will continue to be undertaken over the coming years

The Second National Conference of Farmer Women was held from 3-5 March, 2013 at Thimura, Chitwan with the participation of 162 women from 48 districts of Nepal. The conference was organized with focused discussion on 'Women's Land Ownership and Identity'. The conference well speculated  women's issues by announcing the action point. The conference was successful in raising the voice of land poor and women farmer in the domain of ensuring equal land rights. The program was jointly organized by National Land Rights Forum (NLRF) and Community Self-reliance Center (CSRC).

Organized with the slogan, Land ownership for women farmers' identity and self esteem', the third national women's conference was organized at Thimura, Chitwan on 17th- 18th Mangsir, 2071. Ninety three participants were present in the conference. The major objective of the conference was to establish it as a platform to raise voice against the injustice and discrimination prevailing against women. Women farmers shared their sufferings and challenges through stories. In addition, alternatives were discussed for increasing the identity of women farmers. Discussion was also carried out on the positive changes that occur when women's land rights are established, how an individual, family, community and nation benefits when women get proper land rights. Further, the importance of joint land ownership was also discussed along with the challenges faced in the campaign. Joint land ownership is associated with gender equality. Awareness is required as the word farmer has always been associated men. A thoughtful debate is required in this issue and hence, the support of men is also required to establish women's rights. Hence, participation of men was also included in the program.